It is estimated that the average person checks his mobile 150 times a day!

8 out of 10 smartphone owners check their device within 15 minutes of waking up every morning!

1/3rd of Americans say they would rather give up sex than lose their cell phones!

But, why in the world are we so addicted?

Is this a simple harmless habit formed by chance or is there a lot more than what-meets-the-eye that go behind these apps to make us addicted by design?

While there are a combination of factors which go behind our app addiction, today let us delve into what I believe is the most important contributor.

To understand this better let me press the rewind button and take you back to the 1950s.

Dr Skinner and his pigeons

Dr Skinner, a famous American psychologist conducted a weird experiment. He created a small box (which later on came to be known as the Skinner box) in which there is a small button which can be pecked by a pigeon and another opening below the button where the pigeon gets rewarded with food.

Basically Mr Skinner was trying to find out, if he could create a habit (in this case the pecking of the button) in the pigeon by using appropriate rewards.

In the first set of experiments, he rewarded the pigeon every time they pecked. So basically whenever the pigeon was hungry, it used to peck the button and would be regularly rewarded with food.

Now he decided to do a small tweak. This time he rewarded the pigeons randomly both on the quantity of food rewarded and frequency at which they were rewarded. So instead of the regular 1 peck and immediate food, this time he made it variable i.e say 2 pecks- food-5 pecks-food-3pecks-food and so on in a random pattern.

They started to continuously peck at the button compulsively.

In fact, one pigeon hit the button 2.5 times per second for 16 hours!

Another tapped a whopping 87,000 times over the course of 14 hours,while it got the reward only less than 1 per cent of the time!

So what would you have concluded if you were Skinner?

Simple. Animals can be persuaded to perform an activity more often, simply by giving a variable reward instead of promising a fixed reward.

But wait a minute..Holy shit..What if the same thing works on humans?

It just works the same with humans!

But is this stuff for real? Can you think of something that works on this concept?

The entire gambling industry runs on this simple concept. Gamblers on the slot machines have no way of knowing how many times they have to play before they win. There is always the possibility that the next coin they put in will be the winning one. The gamblers just like Skinner’s pigeons, get addicted to the variable rewards and continue to obsessively play the slot machines.

In fact it is so addictive that, gamblers have started wearing diapers to play longer at the machines. You can read more here.

And just in case you are still skeptical, here is a stat that will blow you away..

The slot machines make more money in the United States than baseball, movies, and theme parks put together!!

Another example is the gaming industry..

Check this video to understand how games are designed using Dr Skinner’s principles:

And to give you a shocking perspective of how addictive these can become, read the below news

Welcome to the scary world of “intermittent variable rewards”

But, why the heck, do we get addicted to variable rewards??

The answer lies in a small part of our brain called the “nucleus accumbens” or sometimes informally referred to as the “brain’s pleasure center”.

This is that same region which gets activated by sex, luxury goods, delicious food, drugs, cigarettes, alcohol etc 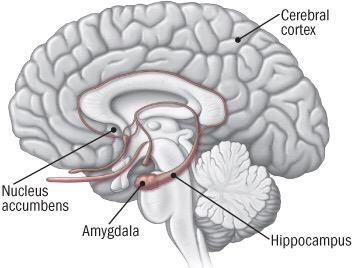 In several experiments conducted, it was found that whenever this region of the brain was triggered it created significant addiction type behavior.

When a set of people were allowed to press a button in a machine which in turn sent electric impulses to their “nucleus accumben region”, the subjects wanted to do nothing but continuously press the brain stimulating button. The addiction was to such an extent, that the researchers had to forcibly take the devices from subjects who refused to give it back.

Unfortunately, this is exactly the same region which gets triggered whenever there is a variable reward in offer.

Now you can understand as to what goes behind the strange addictive power of variable rewards.

So “as we get the reward, our nucleus accumbens get activated and hence eventually we will get addicted to the habit ” – goes my naive conclusion.

But hang on. This is where it gets even more interesting.

Contradictory to what I concluded, the nucleus accumben was less active when the reward was actually received!

It actually becomes most active in anticipation or craving of the reward!!

So that essentially means it is not actually the reward that really matters as we normally would have thought. But rather the anticipation for that reward.

From an evolutionary point of view this is critical. This system kept us motivated to move around, learn, and survive. The rewards are not just restricted to food, drugs, sex, but also includes our search for information.

How many times have you searched for something on google, found the answer, and yet realized half an hour later that you are still online looking for more information?

Remember, that moment when you start scrolling through your facebook feeds and slowly what was supposed be 10 minutes eventually ends up becoming an hour. And you are still frantically scrolling through your feeds in search of your next reward – what are your friends up to, what’s the latest news, some nice article etc. And the key is, it is “variable”. You have no clue what reward you might find next.

Until now, if you still can’t spot the skinner’s pigeon, relax.
It’s us!

So more than the friend’s update it is the frantic scrolling in search of the next update, that is causing the brain’s pleasure center to activate.  We’re mesmerized by the prospect of another chance to find a reward – an endless search for the satisfaction that is never fully realized.

No wonder most of the popular apps have the “scroll” component (referred to as feeds) in it and work on the same principle of variable rewards.

Other examples of variable rewards in the app world

Oops. Even our addiction to watching sports has the “variable rewards” angle to it!

If interested, you can read more about sports addiction here

And do you have this experience of switching channels in the remote of your TV without actually stopping to watching any programme..

Phew. This “variable reward” phenomenon is all around us. *Deep breathe*

Wait a minute. If this principle is used for creating negative habits, can’t it also be used for positive habits. Are there people out there doing this?

A few years back, I was trying to reduce weight and had joined a gym. It was a struggle for me to be regular and my attendance levels were extremely pathetic thanks to my low levels of discipline and will power. But astonishingly, in the last two years I have been reasonable consistent and work out 3 days per week with a fitness group called The Quad (read more about them here ). And making my job even more difficult, their classes are at 6 am in the morning which essentially means I wake up at around 5 am, three times a week!

How in the world did this miracle happen?

The key difference versus a normal gym was that workouts here are never repeated. Each and every class you go, you have no clue on what the workout is going to be.

It is the “Variable Rewards” yet again.

Confirming my suspicion, here is something that suddenly caught my attention from one of their testimonials,

And just when I thought, maybe I am taking it too far, I suddenly get reminded on the usual “What-happened-in-class-today?” messages from people who miss the class.

The variability factor definitely seems to be working.

While the power of variable rewards can be used both for good and bad addictions, unfortunately most of them lean towards the latter.

Product designers know the power of variable rewards and are applying it across various products to get us addicted. These are guys paid in millions to crack the code to our brains and get us addicted to their apps or products.

All this makes it a one sided fight and the simple truth is that we need to brace ourselves for an environment where everyone out there is coming after our most precious thing – time.

While the fight to protect our time is going to be a long drawn one, the first simple step is to acknowledge and start consciously watching out for this variable reward created cravings in our day to day lives.

Now to start addressing the problem, we also need to know about the additional techniques which complete the loop of habit forming products.

In our next post we shall learn about the entire loop, the various types of rewards and figure out some ways to have some control in the way we use these products.

If you like the content, it would be awesome if you could drop in your comments and also don’t forget to subscribe to the blog (all posts shall be delivered directly to your inbox), because your valuable comments and subscription are my variable rewards 🙂

If you have survived me till here, thanks a ton for reading and happy investing.